A group of local performing arts organizations appears to have raised its half of the $150,000 that’s been projected to be needed to pay for a feasibility study of developing a community performing arts and cultural center in Longmont.

“Tentatively, it looks like we’ve met our goal, once our pledges and a grant award are deposited,” said Bob Balsman, coordinator of the Longmont Performing Arts Initiative.

“We’re verifying our numbers, and we will announce the total at our upcoming event for our members and donors on June 6,” said Balsman, who also is president of the Longmont Chorale, one of the Longmont Performing Arts Initiative’s member organizations.

The next step will be selection and hiring of a consultant to conduct the feasibility study, with the expenses to be paid through a funding partnership agreement that includes the city and several other organizations as well as the Performing Arts Initiative.

Representatives of the Performing Arts Initiative — which includes the Chorale, the Centennial State Ballet, the Longmont Concert Band, the Longmont Symphony Orchestra, the Longmont Youth Symphony and the Longs Peak Chorus — approached Longmont City Council during its May 2018 retreat to argue the need for a 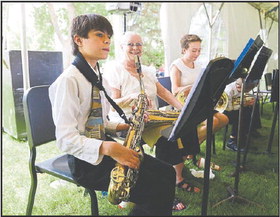 Kenny Jarnagin waits between songs during the Longmont Youth Symphony Orchestra's performance at the annual Fourth of July celebration in Thompson Park in 2014.

Advocates of the performing arts center proposal showed up again this year, at the council’s February retreat, to again present their case for city involvement in developing such a center.

Later in February, city council approved sharing in funding the projected $150,000 cost of studying the feasibility of a new cultural center for the performing arts — a facility that, in addition to accommodating local, regional and national performing arts productions, might also provide space for conventions, conferences and other large meetings.

“The city is encouraged by the coalition that has come together to fund a feasibility study for a performing arts center and a convention center. Both facilities are important components for achieving the City Council’s vision for the lower downtown/river corridor area,” assistant city manager Shawn Lewis said in an email.

Lewis said seven firms submitted proposals for the study. Representatives of the coalition that will be funding it will be interviewing three finalists — Johnson Consulting, Hunden Strategic Partners and Keen Independent Research — on June 19. “We had excellent responses to our call for proposals and look forward to selecting a firm and ensuring the partner organizations are equipped with information needed to move forward with these projects if feasibility is confirmed through the analysis,” Lewis said.

“This has been just a fantastic journey,” Balsman said in an interview in which he confirmed the Longmont Performing Arts Initiative members believed they had reached their goal of raising the $75,000 the organization needed for its share of the study costs — a goal announced in March that members hoped to reach by June 1.

“We are happy, not just for the performing arts, but for Longmont,” Balsman said.

“I am overwhelmed by the level of support from the community,” said Jill Harrison, chairwoman of the Performing Arts Initiative’s Development Committee.

The Performing Arts Initiative in its longmontcenter.org website’s online appeal for donations said “we currently lack sufficient performance venue availability and suitability. This means our community is losing out on potential revenue from local performing arts related activities right now. This does not even take into account the potential revenue we could be benefiting from if we had a cultural and performing arts facility of the caliber that would attract regional and national performers.

“With a state-of-the-art performing arts center built to accommodate the needs of ‘future Longmont,’ using the information we’ve gleaned from other communities who have successfully built similar facilities, the increasing financial benefit for our community would be in place for the long term.

“We have the golden opportunity to fulfill an important niche that is currently missing in our community and our region,” the Performing Arts Initiative said on that website.

“Longmont has a unique opportunity — right now — to move forward with a state-of-the art facility and become the regional center for the arts. We can create a legacy to be proud of today and the future.”

According to the February agreement signed by representatives of the feasibility study’s funding partners, the study is expected to include the community’s “ability to support and maintain a performing arts facility, conference facility or some combination of the two, including but not limited to the size and scale, optimum location of either or both facilities and estimated costs associated with facility development.”

Click here to see this page in the eEdition: